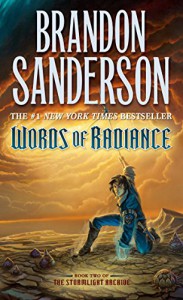 This was very much my cup of tea. Strong world building where despite the presence of magic there seemed an almost science fiction tint to it all, where you could see a scientific rationale. Stronger in that regard than say GRR Martin's Song of Fire and Ice, but not as striking as in Pullman's His Dark Materials. As with GRR Martin this is rather epic in both geographic scope and number of characters, and written in a third person limited rotating point of view. Sanderson so far doesn't seem quite as ruthless to his characters, but you feel insecure enough at least to feel considerable suspense. And I cared about his characters, Kaladin and Shallan--and both grow in this book in unexpected ways both internal and external. There's a moral complexity here where characters don't fall too neatly into good versus evil. There are strong female characters that don't fall into stereotypes and some interesting twists on the usual gender roles. Despite its length though it's tighter than Martin's book. There's no flab and it all seems like it's going somewhere. I feel this is even stronger than the opening book in the trilogy. My only gripe is now it's over, the third book isn't published yet and I'll have to wait. I haven't read his more famous Mistborn series--yet. But I may have a new favorite author.